Mistress Katja's boyfriend bragged about how he was a macho guy and he could withstand a good amount of pain. She laughed at his claims and he took offense. He wanted to prove it so she trampled him using her sneakers and even with her bare feet. She trampled him all over from his face to his chest and while it was painful, he did his best to endure it till it became unbearable.

Lady Steffi hates lazy people. She hates lazy slaves even more and when she found out that her new slave was lazy, she did not like it. She had to do something about it. She called him to the living room and she punished him for his laziness. She made him lick her sneakers clean and even made him smell her smelly feet. She told him she would do the same thing till he became hardworking. He had to.

Bored mistress Akara has fun with her sneakers

Mistress Akara was bored at home. She had watched all the movies in the house and she did not find anything interesting online to watch. So she had to use her imagination to kill time. Her imagination wandered to her sneakers which she imagined would be perfect tools for trampling and stomping on someone who she would have wanted to punish had there been such a person. And that is how her sneaker and trampling fetish was born.

Mistress Amy always looks sexy in her converse sneakers. She loves to wear them anytime she feels like humiliating a loser because she always attracts a lot of guys whenever she wears them. And she always chooses the most offensive guy who tries to make passes at her or cat call her and then she uses the same sneakers to punish him. She likes to make them lick the soles of her sneakers besides trampling them.

Mistress Becca came home and found her boyfriend had been drinking all day and had not done anything productive. She did not want a drunkard for a boyfriend so she crushed and beat the hangover and booze out of his system. She used her sneakers to crush him and trample him till he became sober. Even through the drunkenness, he could feel the pain of her sneakers trampling his body hard. 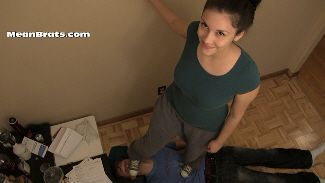 Lady Kara punishes boyfriend for going through her stuff

Lady Kara found her boyfriend going through her stuff and she was pissed off. She could not understand why he was checking her handbag and she had to make sure he never did it again. So she punished him by crushing him and jumping on his chest using her sneakers. She also made him lick the dirty soles of her sneakers until he begged for mercy. When she was tired, she sat on his balls.

Mistress Camille was waiting for her slave. She had sent him on an urgent assignment but he was taking longer than she had anticipated and she was getting worked up. The longer he took the angrier he got and had to punish him. She planned to make him lick and smell her sweaty and stinky converse sneakers as well as her sweaty and smelly feet. That would send him a message.

Mistresses punish guy for being too proud

These mistresses wanted to show this guy that he was not as hot and as important as he liked to feel he was. They wanted to cut him down to size and they did that in a cruel manner. They had muddy converse sneakers which they made him lick till they were clean. They also trampled him and humiliated him a great deal before they let him go with a warning that he should stop being too boastful.

Mistress Kathy and her foot fetish

Mistress Kathy loves to crush using her socks, bare feet and her sneakers. She loves her converse sneakers and enjoys it when a slave or a loser licks them till they are clean. Today she sat in her home office and told her slave what she wanted him to do to her sweaty feet, her smelly socks as well as her dirty converse sneakers. And she made sure he did everything to the letter.